We are now over the belief that the Internet will never prevail. But the fact that it is still uncharted territory for many is shocking again and again. Especially for companies that are of a size where an IT infrastructure is essential. Recently this has become very noticeable again. The COVID-19 virus causes restrictions, quarantines, and lockdowns and suddenly everything comes to a halt.

Not only production lines have to pause, but meetings and decisions also cannot take place due to lack of presence. Yet it is easier than ever to meet people from all over the world. There are online alternatives not only for meetings, but also for training sessions, seminars, and entire company events.

In the following article, we would like to inform you about the possibilities and advantages of streaming from the Greenscreen Studio.

What is a Greenscreen studio?

Known from film and television, a green screen offers the possibility to cut out the green color in the background by so-called keying. As with news broadcasts on TV, a studio room or any other background can be used. This has the advantage that such a room is very flexible and can be used for several purposes. 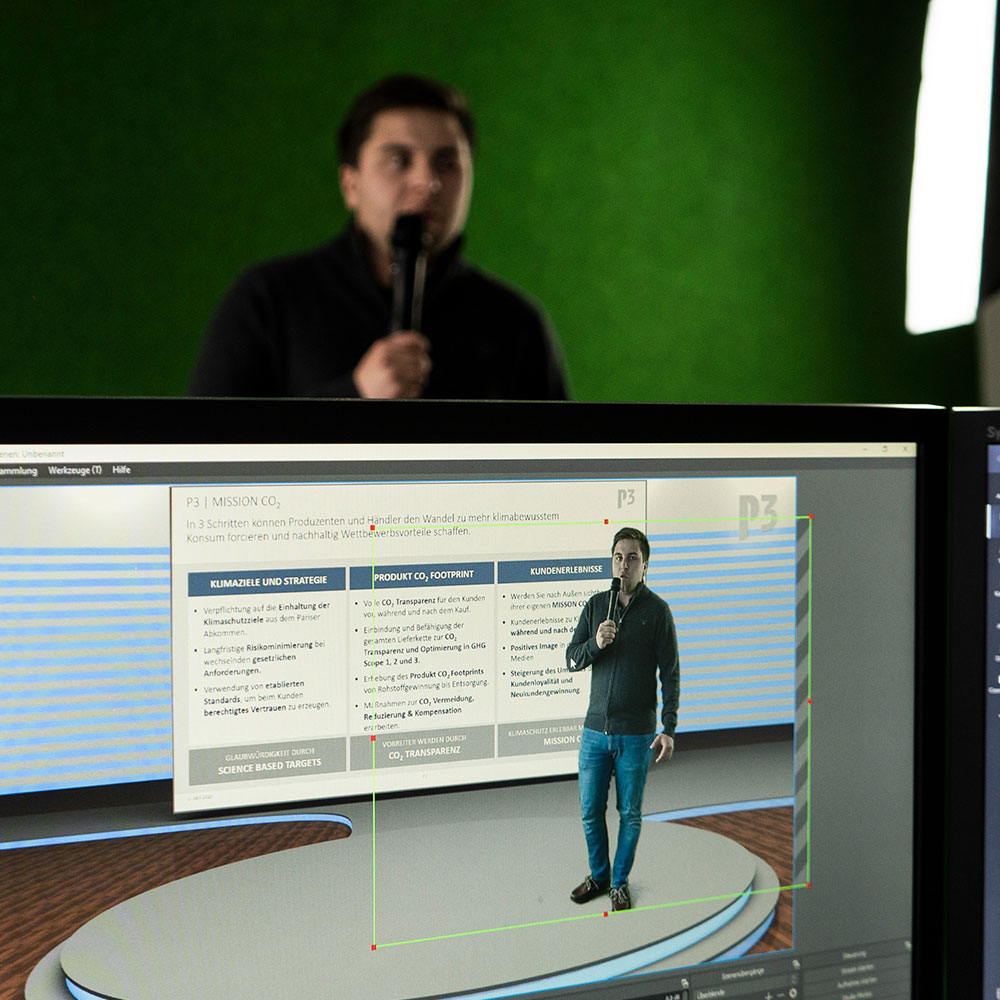 Basically, any color can be cut out. In the beginning, Hollywood productions mainly used blue backgrounds, because human skin has few blue tones. The color green is even less present in the skin and has now largely replaced blue. There are exceptions. If, for example, you want to shoot with plants, it makes sense to use a different color than green.

The structure of a greenscreen studio can be very different. It is important that the object or person to be filmed is completely in front of a green background. In the P3 Green Screen Studios, the setup is adjusted to the fact that common formats can be used.

The main element of the room is the green background. Thus a large wall surface and part of the floor are covered with green elements (carpet, painted wall). The heart of the technology is a powerful computer that processes and transmits image and sound signals. This includes the camera. The camera transmits the image to the computer, which processes it for streaming using special software. A further image input takes place via the lecturer’s laptop. In this way, for example, PowerPoint presentations can be projected into the image. 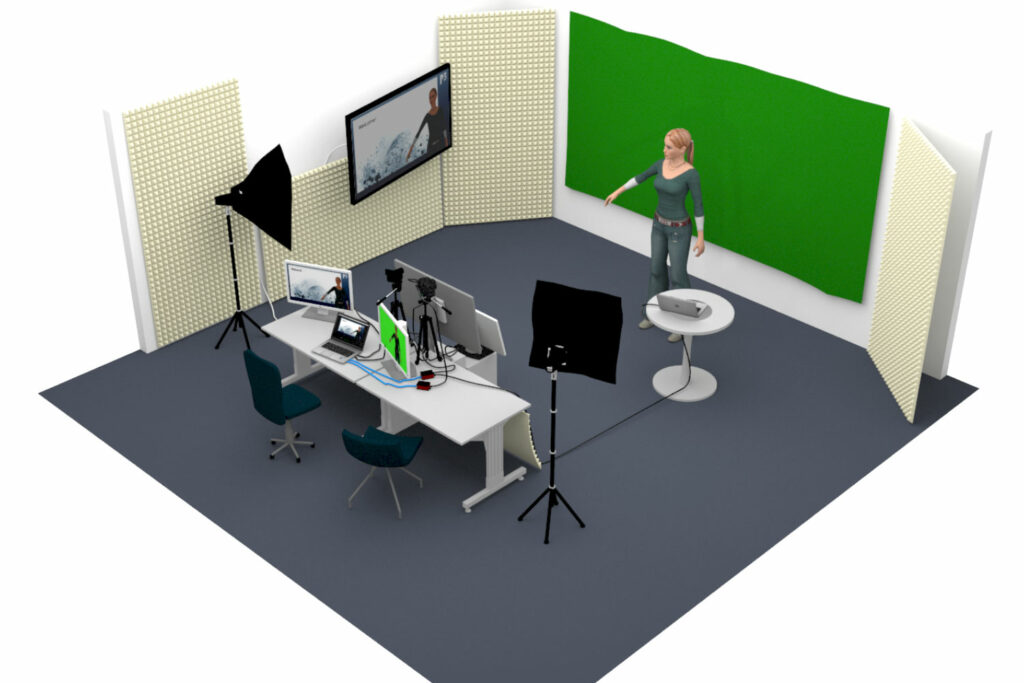 The lecturers are provided with three different screens:

Which formats can be realized with the Greenscreen studio?

Due to the technical requirements, there are few limits to the imagination. However, our specialty is the following two formats:

1. Online Training / Webinar. The qualification of employees in special areas is an elementary component of knowledge transfer in every company.

Online Events. Especially in times of a pandemic, when restrictions and assembly bans are part of everyday life, it is important to communicate. If it is not possible to attend in person, the event can easily be moved to the Internet. This does not mean that the recipients only have to listen to frontal lectures. There are several ways in which the recipients can participate. 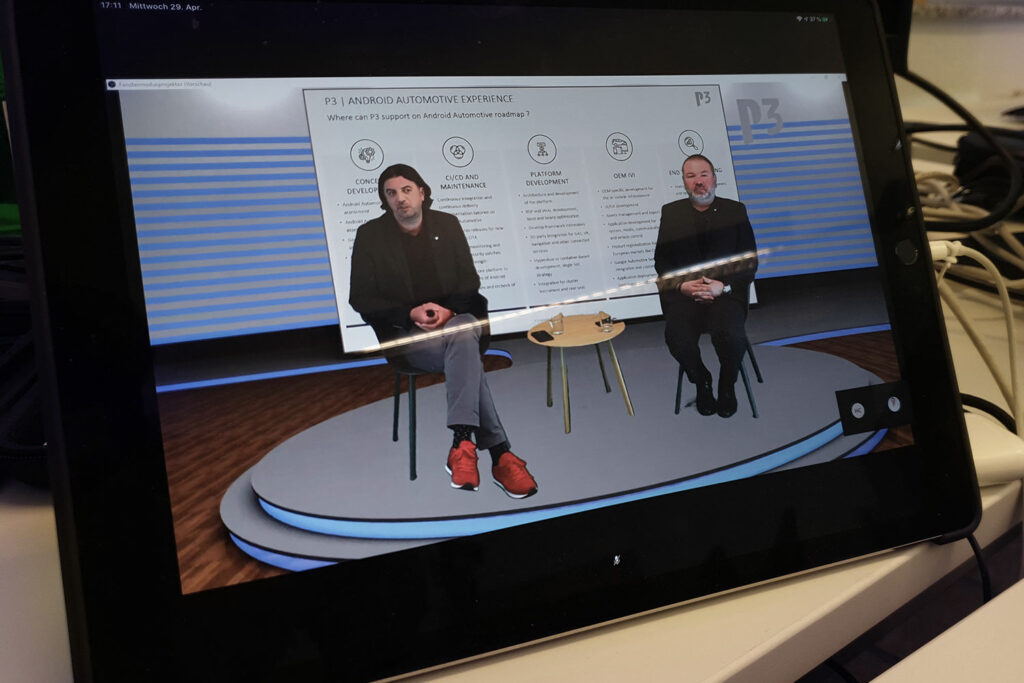 These include moderated Q&A (question & answer) channels, the possibility of adding speakers, or the classic direct communication via video chat.

What are the advantages of using the Greenscreen studio?

Conducting seminars and events via streaming offers some advantages that make the use of a green room attractive.

COST-SAVING
A clear advantage is the reduced costs. Imagine you have a company event where 1000 employees are invited. The company pays for the travel and accommodation. You need a suitable location that can hold enough people, you have to take care of setup and catering.
If you have a stream, only the people are on-site, who will lead and present the event. All other participants can be comfortably connected from the office or home office. 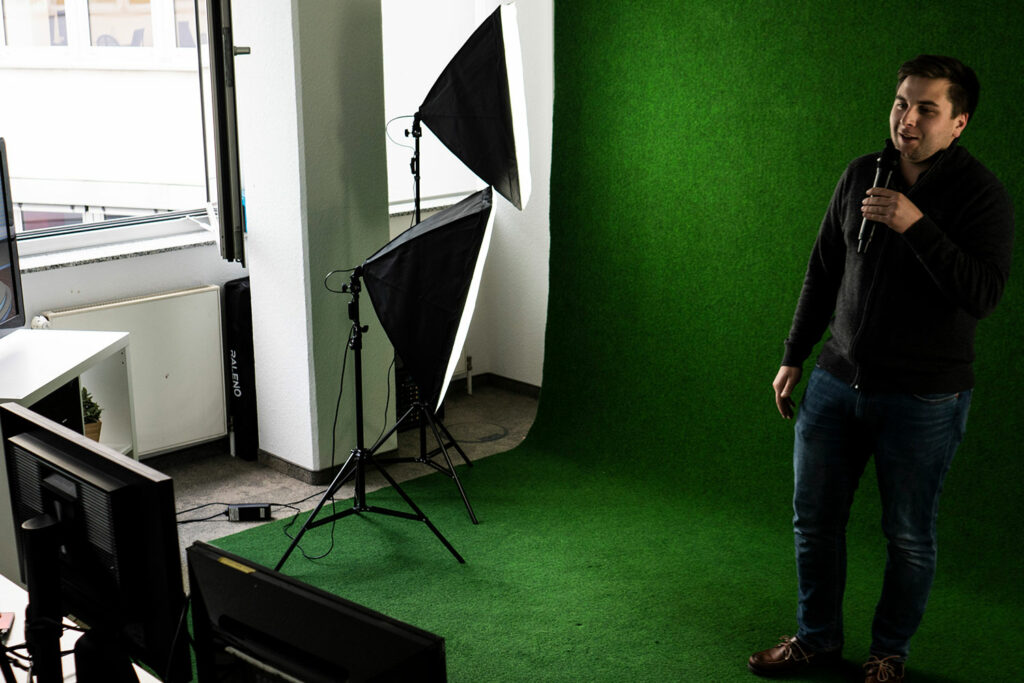 ECOLOGY
The reduction in travel costs has a side effect that should not be ignored. Your employees do not have to get into the car, train, or plane to attend an event. This improves the ecological footprint enormously.

FLEXIBILITY
Due to the fact that everything takes place in a virtual room, you are very flexible when it comes to designing the event. Adjustments to the virtual studio are made digitally and can therefore be implemented quickly and cost-effectively.

SPONTANEITY
By eliminating factors such as room booking, catering, coordination, etc., a digital event can be implemented much faster. If you have a fixed technical setting, it only takes a short test and you can go live.

What is to consider?

Livestreams behave somewhat differently than face-to-face events. Even trained speakers are used to seeing direct reactions in the faces of the audience, hearing laughter, or being confronted with counter-questions. All this can also take place in a Livestream, but it needs more time.

GIVE YOUR VIEWERS REACTION TIME
With many participants in one room, a group dynamic quickly develops. It is easier to ask questions when you can see that others also have a question. It is therefore important to check more often if there are comments or questions.

PLAN BREAKS, FOR YOURSELF AND YOUR AUDIENCE
The average attention span in front of the screen is shorter than in a workshop room with other people. Therefore, it is important that you plan enough breaks to process the recorded information. You will also find that more breaks are needed if you look into a camera instead of into faces.
Tip: You can use the pauses to collect questions and answer them at the beginning of the next block.

DO NOT WEAR GREEN CLOTHES
Green clothes are the natural enemy of green screen keying. If you stand in front of a green wall and wear a green shirt, your upper body will disappear. This makes people laugh, but undermines the seriousness of the matter ?

Video streaming in combination with green screen technology offers a variety of possibilities to get in touch with your employees or customers without having to meet in person. We at P3 have been using this technology very successfully for some time and with consistently positive feedback. Our employees and customers are enthusiastic about the technology and they enjoy being internationally present during Corona. 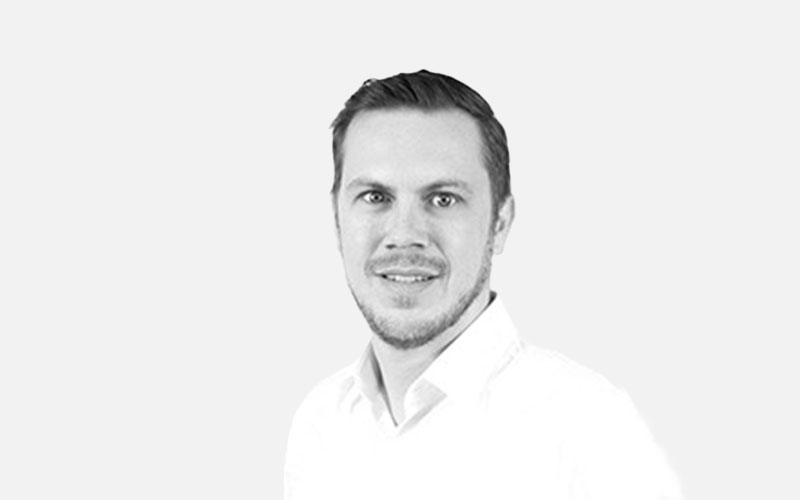 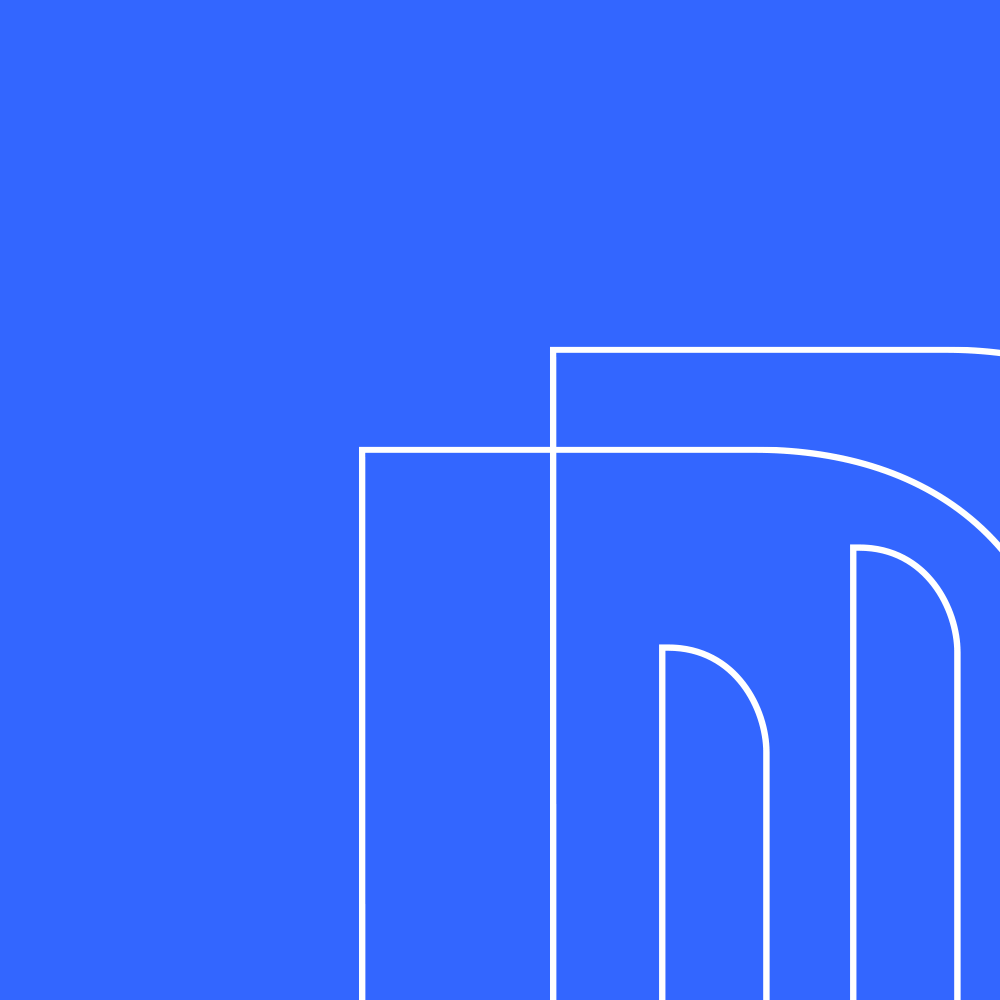 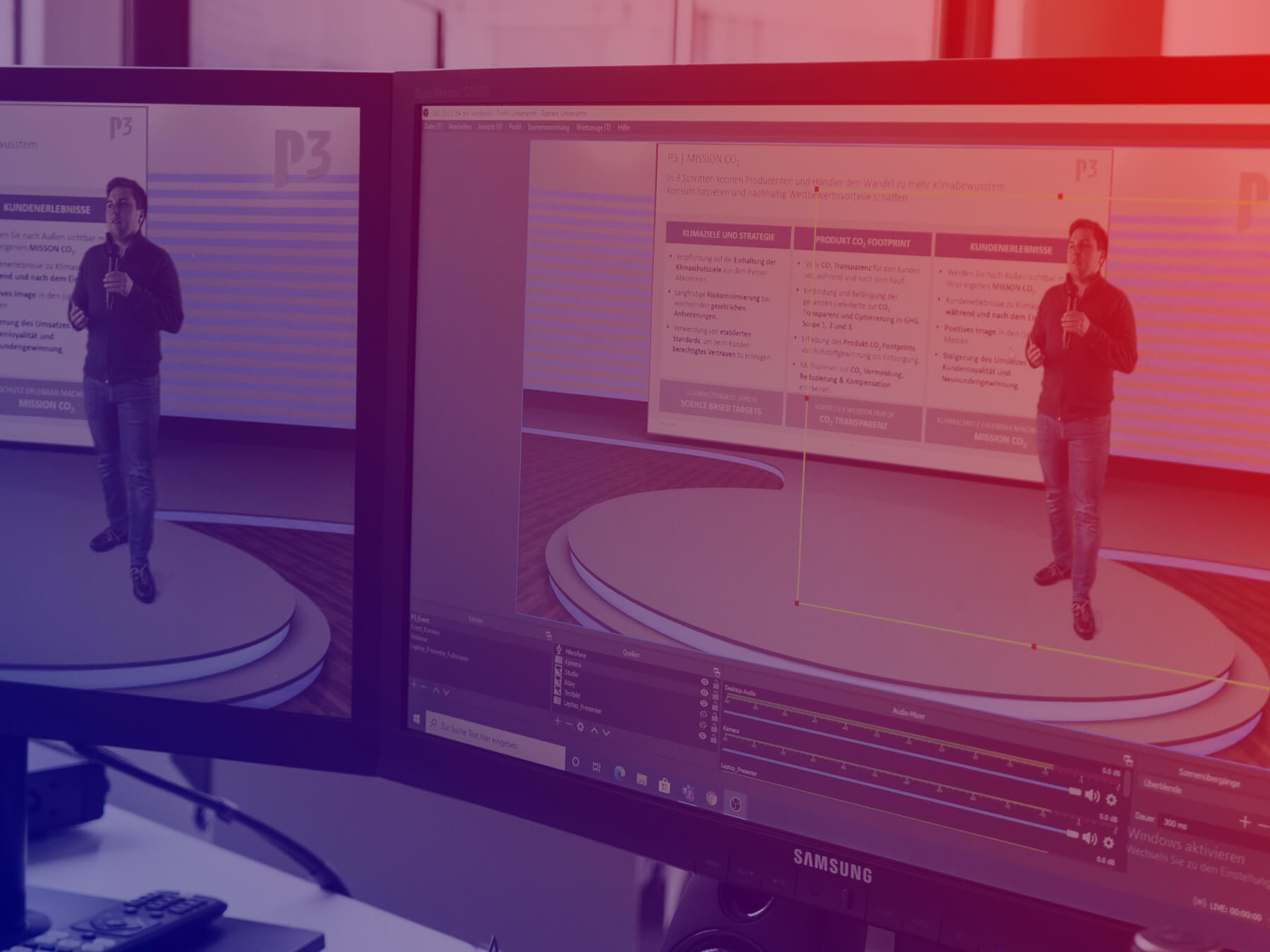